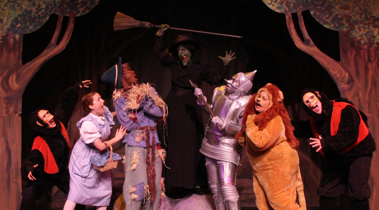 Eileen makes her debut at the prestigious Actors’ Playhouse, starring as the infamous Wicked Witch of the West in the Wizard of Oz! This fulfills Eileen’s lifelong dream to be green and release her inner evil cackle. School show on weekdays, shows for the public on Saturdays at 2pm & some special 11am performances.

AFTER SHOW UPDATE: The video quality is only so-so on this one because I’m in black, in dark green makeup, in a dark dungeon…but if you couldn’t be there, HERE is a chance to see the Witch cooking up her world-famous Wicked Witch Stew. Mmmmm! Just like mom used to make!

Director Earl Maulding had Eileen audition for 2 parts:  Glinda the Good Witch of the North & the Wicked Witch of the West. Since Eileen dressed as a witch for nearly every Halloween of her childhood, she knew which witch she wanted, but would be happy with whatever she got.  She cackled in delight when she learned she won the part of her dreams & would get to legally terrorize countless children…