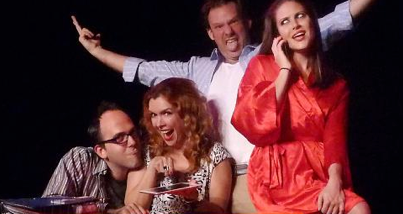 See photos from the play here!

In this timeless story of Raunch & Circumstance, a newly-sober, musicals-obsessed gay man takes the road to rehab right into a business of “ill repute”.

Enter Gina, a tough-as-nails, larger-than-life Madam (that’s me!) who would put the Housewives of Any County to shame.

Gina thinks she’s gonna teach her new assistant a thing or two.  He thinks the student is about to become the master in the proud tradition of All About Eve.

Tantalizingly, playwright Josh Mesnik wrote HAVE I GOT A GIRL FOR YOU based on his true-life story and plays himself in the comedy, revealing the actual inner workings of a high-end escort agency.

In that crazy “it’s a small world” way, a fellow actor from my last show, HEREAFTER, recommended me to Josh, who immediately remembered he’d actually seen me in a comedy I did four years ago!  Josh and I never met when we both lived in South Florida, yet moved in the same circle of friends, as evidenced by our Facebook “friends in common” feature.

Josh’s play premiered at the New York Fringe Festival, where it won the Audience Favorite Award and the opportunity to perform in the Fringe’s Encore Series.  That’s where I got the opportunity to step in and play the lead, a madam who represents a dramatic departure from any character I’ve ever played…even the wicked witches and murderous queens!

The show had its final performance at the Fringe, but this isn’t the last we’ve seen of Josh & Gina!  Naturally, you can count on me to report on the next stages of life for HAVE I GOT A GIRL FOR YOU.

THE PROMISED UPDATE:  The comedy is getting a second production in South Florida at Island City Stage in 2014!  And our fearless author Josh Mesnik is writing two new plays!

This new comedy had the honor of winning the Audience Favorite Award from a pool of 187 shows at the New York Fringe Festival, the largest multi-arts festival in North America!