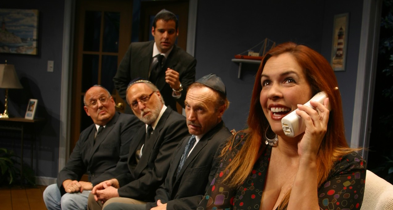 Eileen stars as Christina Fernandez, a young latina madly in love with Ron Greenstein, an older Jewish man, who loves her but can’t overcome his fear of marriage. When he claims he cannot marry her because she’s not jewish, Christina decides to embark on the clumsiest, most screwball conversion in the history of the world…

This show was directed by Hugh Murphy, a genius at mining “Comedy Gold” out of thin air and creating a play so vigorous and dynamic Eileen lost five pounds during rehearsals from running around so much!

“Eileen Faxas plays the lead in great style. Her star quality grabs the audience from her opening line and never lets go through two hilarious acts.

The entire cast is excellent and provokes lots of laughs. Faxas’ expressive accent is dead on target, but she’s fully comprehensible. You’ll be entranced and delighted with this comedy under Hugh Murphy’s insightful direction.”

This hilarious comedy is the only play completed by Danny Simon, Neil Simon’s big brother & a successful comedic writer for TV. It is Danny who started writing “The Odd Couple” before finding the writing process too solitary and handing it off to his little brother, who became famous for it.