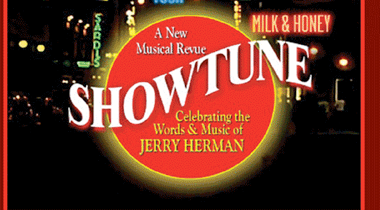 Eileen is starting 2009 starring in this fabulous revue celebrating the music & lyrics of Jerry Herman, the musical genius behind Broadway hits like Hello Dolly, La Cage Aux Folles, Mame and more.  With one hit song after another, this popular musical is a favorite with audiences who will recognize one Broadway Anthem after another!

Eileen is particularly thrilled to be working with Director Michael Leeds for the first time, a successful Broadway writer and director known as “The Actor Whisperer”!

Eileen’s Insider Info:  For the 3rd production in a row, I will be playing opposite Joey Zangardi.  It’s not unusual for actors to work together more than once, but it’s very unusual to get cast together back-to-back-to-back like this!  He played my Rabbi in The Convertible Girl and the Tin Man to my Witch in The Wizard of Oz. I’m also psyched because some of the songs I’ll be singing were prominently featured in Wall*E, my favorite movie of 2008.

It’s been a busy theatrical year for Eileen…who will have starred in five productions in 2008.  In between, she has squeezed in a few concerts and time in the recording studio…assuring 2009 will bring fresh new music from our favorite songwriter!

Visit my blog to read the two reviews!