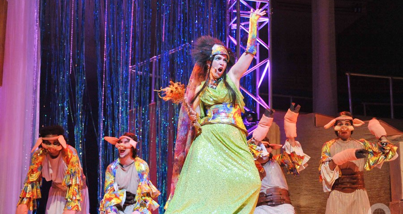 CHECK OUT FANTASTIC PHOTOS FROM THE SHOW RIGHT HERE.

ROCK ODYSSEY is a new theatrical spectacle combining the drama of ancient Greece with the flair of Broadway to create a rip-roaring adventure.

It’s the classic tale by Homer that we all read in school about, but this version of Odysseus’ epic journey comes with a modern, funny, rock ‘n roll twist!

For most of the children in the audience, this special “field trip” will be the first time they’ve ever experienced live theatre!

And with amazing lights, a huge set, puppet monsters, rock music and a snowstorm, it will be unforgettable!

The Arsht plans to expand the program to reach 75,000 youngsters each year, cultivating their creativity.

In this new musical, Eileen plays the mischievous, magical, oh-so-flirtatiousGreek Goddess Circe  who turns men into pigs,  which is a pretty nifty little trick to have at your disposal under the right circumstances…