Paris Will Make You Feel Feelings 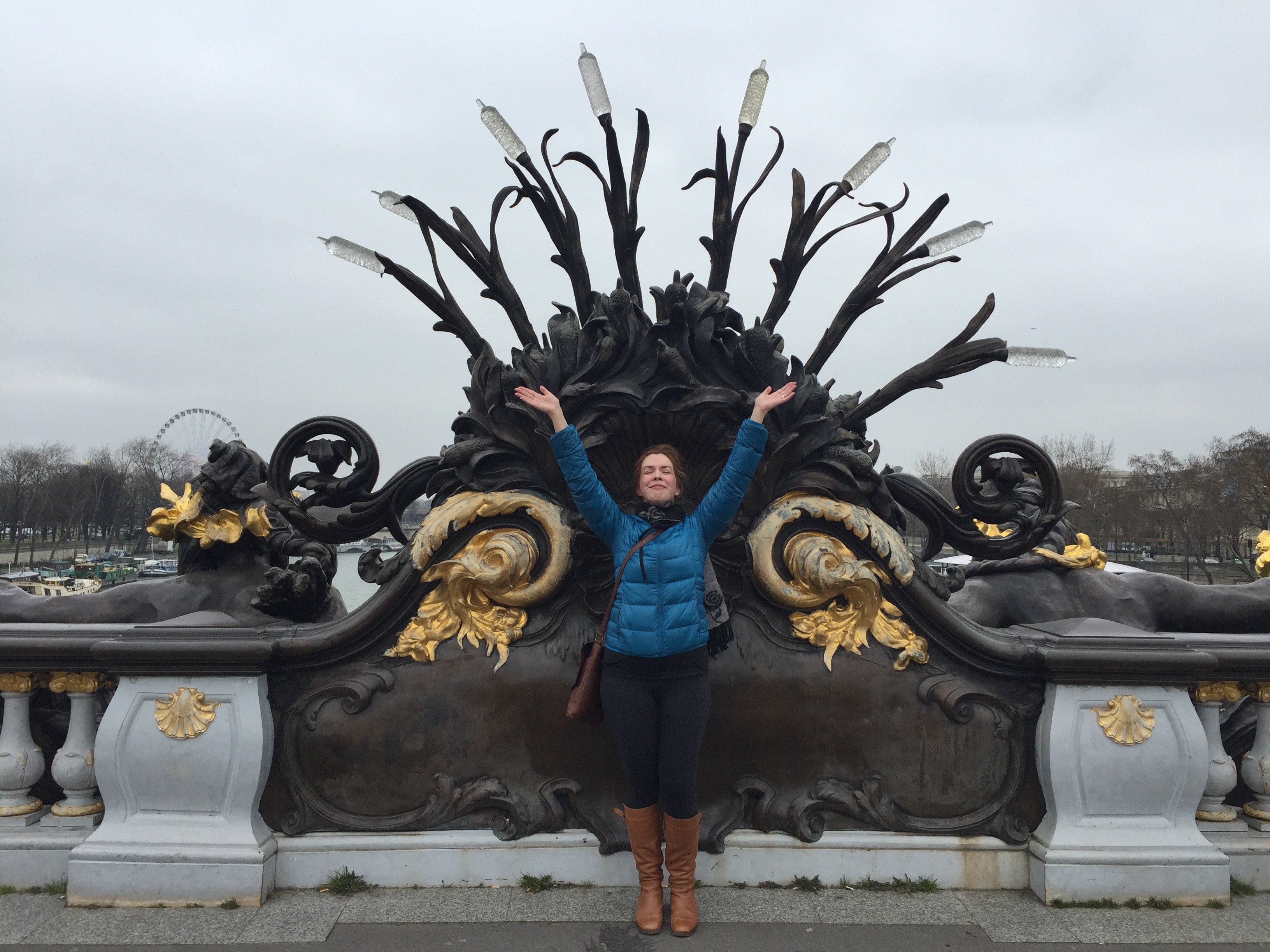 I detest crying. Really reject it as a personal weakness in myself. So I find myself wanting to spontaneously cry in Paris for joy and am unsettled-yet-happy-but-confused and swallowing giant wads of Big Emotions in uncomfortable gulps.

So let me tell you about my day.

It’s my first day off after six days of rehearsal for a Big New Musical in Famous Paris at a Historic Opera House with a Creme de la Creme International Team, but No Pressure, Really. And I’m working with Serious Jet Lag (Lag de Jeté).

I eat breakfast (there is a croissant involved) then can’t seem to get out of the hotel room until 3 in the afternoon. Sadly, I am moving as fast as I can. I originally thought I’d hit three museums today. Then thought “maybe just two”. By Sunday afternoon, it’s become “what was I thinking?” followed soon after by “you better leave your hotel room today”.

The ONE museum that makes the cut is the Sainte Chapelle – for the lofty reason that it is closest to my hotel. Unfortunately, half of Paris has the same plan.

Je suis désolée. Which means This Totally Sucks. I don’t want to spend my day off in an hour-long line. I think about leaving, except that’ll mean I hit zero museums and will not be winning at How To Spend Your Day Off In Paris. I try to find out how long I’ll have to stand in line by asking French Dude in Charge. “Je ne sais pas” is the unsatisfying reply, to which the people in line in front of me knowingly say: “It is the French way.”

And with that, a Frenglish conversation begins that leads me to my new French Best Friends: Simon, Veronique et Serge! Simon & Veronique are married, and Serge is Veronique’s Dad and Veronique & Serge are super-French but Simon is an immigrant of the world. And the line no longer matters because I’m learning all kinds of words and funny sayings, the only one of which I can now remember is “two fingers in your nose” which means when something is ridiculously easy (deux doigts dans le nez). In exchange, I teach them Cuban sayings like “lowering the food” and “picking low mangos.” This is cultural conversation gold.

Suddenly, French Dude in Charge cuts off the line right behind my new friends, Simon, Veronique and Serge! But they exclaim “Non!” They are a party of FOUR, they say, and I am in! Naturally, we are now inseparable. We take photos together. “Selfies!” I exclaim and beckon to them in Frenglish and Sign Language (although “Selfie” needs no translation…)

One of them ‘may’ be touching my rear end in one of these photos. But I’m not naming names. “It is the French way.”

Sainte Chapelle is breathtaking and exalted. My French amis and I have a grand old time and oooh and aaah and laugh out loud so much that Someone In Authority shushes us. We are being very unFrench.

We exchange email addresses, they move on, and I proceed to SHAKESPEARE & CO., a historic bookstore that I definitely know about since last night when my brother-in-law told me about it.

Little do I know that I’m about to have my Parisian Musical Debut.

But back to my Parisian Musical Debut…

I inadvertently discover there is a Tea Party/Poetry Reading every Sunday from 4 to 6pm at Shakespeare and Company. I’m drawn to it, listening to the poet Panmelys (she’s Welsh but from London and has lived in many places). Her poetry is beautiful, and the bells of Notre Dame toll on cue when she recites of the passing of time.

I drink her tea. She even breaks up the hard sugar cube for me, which makes me feel like a child but I rather like it. I eat the cookies. And when Panmelys the Poet asks us to introduce ourselves, most people there say they’re visiting, and I mention I’m doing a new musical down the street. And one thing leads to another and I’m asked to sing, and how can I say “Non”?!

So I’m in Paris — at Shakespeare and Company – singing the classic Cuban folk song GUANTANAMERA. Because why not. And because I can’t seem to remember the words to any other song in that moment. And by the second verse, everyone in that room — British, Korean, Chech, Australian, Finnish, and one American from San Francisco — is singing GUANTANAMERA with me. It. Is. Awesome.

An hour later, I walk back out into the cold, crisp air in the slanting light of late afternoon. My heart is full. I was feeling like a Paris underachiever, but Paris has lifted me up in ways I never saw coming.

Suddenly, I feel them. The tears. Not on my face. In my soul. But they’re threatening to emerge because I am Feeling Feelings. Feelings I can’t Explain nor Control. I look at a beautiful little park, and just as I think the Feelings may erupt, a French Dude of Dubious Intentions starts talking to me.

He’s eagerly speaking of the “beau parque” and it IS a beau parque, and sure I’ll go into the beau parque with you and talk to you in French. And he’s showing me videos on his phone of what the park looks like in the summertime, and he’s asking me if I’m alone. And I’m inexplicably understanding every word and replying in French and eventually shake him mere minutes later when I cross the street to enter Notre Dame for Mass.

I follow along to the French. I smell the incense. I marvel at the majesty of the 15-priest procession. I repeatedly resolve to learn the Our Father in French. I sing, I pray, I rue that I don’t know mass better so that I may automatically know what is next and what needs to be said. And yet, none of that matters. I understand enough. And I open my heart enough to understand beyond words. And then there is THAT ORGAN from which the thunder of God’s own voice emerges. I keep turning around to the back of the church to look up — like a country bumpkin looking at New York’s skyscrapers — incredulous and in awe. I am an organ bumpkin and do not care who sees it. I am in awe of the power emerging from the massive pipes towering over the cathedral. And after I experience my first French mass, I enthusiastically share the news (in French, of course) “this was my first French mass!” with the woman seated next to me. She smiles and elegantly replies in a lovely French/Spanish combination (aka “Franish”), saying: I am welcome in Paris.

I look at her. And truly, I believe I am.
And I am not going to cry about it.
Category: BlogBy Eileen