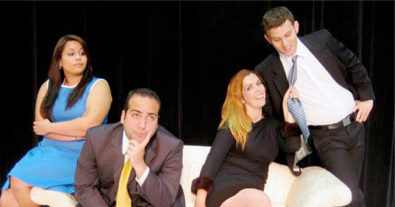 Eileen stars as Woman #1 in this popular off-Broadway musical, which takes on the hilarity and reality of the mating game, from dating to marriage to family car trips to geriatric pick-up techniques. The location is Alper JCC’s Robert Russell Theater, just two blocks from the Kendall campus of Miami Dade college.

There’s probably no place more fascinating in any theatre than the Costume Department, and Miami Stage Company has an amazing floor to double-high ceiling array of racks of clothes. Need a fairy? No problem! How about a Ninja? Got it! But do you know what else theatre costume departments have? Layer upon layer of thick dust dating back at least two millennia. Eileen found this cute black dress she’s wearing above for the photo shoot but also picked up a massive allergy attack! Ahhhh! The glamorous theatrical life….

This musical ran from 1996-2008 for 5003 performances, making it the longest-running off-Broadway show in history. It was translated into 13 languages and had permanent productions all over the world. The New York off-Broadway show closed down one month after our show closed.