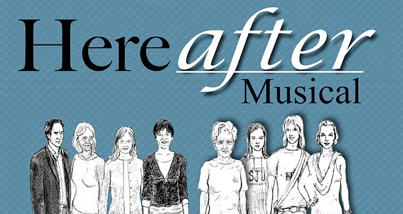 See pictures from the show here!

I had big, exciting plans for the last week of March.  BIG plans.  I was going on a Disney cruise.  Let me repeat.  A DISNEY Cruise.  I was going to have some serious one-on-one time with my longtimeamour Mickey Mouse.

Then, I would round out my eventful week with a trip to Miami, where I would pack up the material acquisitions of my life and move them from Miami to New York City.  (Jake, git a rope)

The Friday before My Big Trip, I got a call inviting me to join the cast of a brand new musical called Hereafter, which would be making its Off-Broadway debut in a month!  And did I mention rehearsals started at the very same time I was supposed to be enjoying the Breakfast Buffet inside the Enchanted Garden aboard the Disney Fantasy on its maiden voyage?

This is where I said goodbye to the Fantasy for the sake of The Dream.

Now, I am making my Off-Broadway debut in Hereafter, an evocative new musical drama that dares to explore the what-if and what-now of life after death, letting us view grief from the viewpoint of the survivors and the dead.  I play Christina, a professional woman in the midst of a full-fledged crisis since an unthinkable series of events took her daughter’s life.

Hereafter began life in 2005 as a musical idea called Life & Death.  It’s the brainchild of Vincent Favale, who made his TV debut on the David Letterman show in 1982 and is now the TV Honcho in charge of the David Letterman show!  After a concert and a staged reading, that little musical idea of Vincent’s, now called Hereafter, is having its Off-Broadway debut, and I’m thrilled and honored to be part of it.

To read (and hear) much more about this new musical, check out hereaftermusical.com.

AFTER SHOW UPDATE:  After two weeks of performances to packed houses overcome with emotion, the first run of Hereafter is now history.  That’s right.  I said first run.  Looks like Hereafter is going to enjoy a healthy afterlife.  I’ll keep you posted!

Three strangers come together at the home of a psychic, desperate to make contact with a lost someone.

Little do they know their loved ones will actually appear…and when they do, we discover the living aren’t the only ones unable to  move on. But will helping the living force the dead into an unknownHereafter?